before and after: christmas bedroom makeover

by: tamsen
Our parents moved out of the master bedroom in their house two years ago to build a walk-in closet and replace the flooring. They laid the floors and put up a new wall, but with both of them at work 50+ hours a week, the project eventually fell by the wayside. After a few months, the room was forgotten and became a place to stash unused furniture. Our mother had mentioned redecorating and moving back into the room a few times over the last couple months so for Christmas we decided to surprise them by finishing the project. 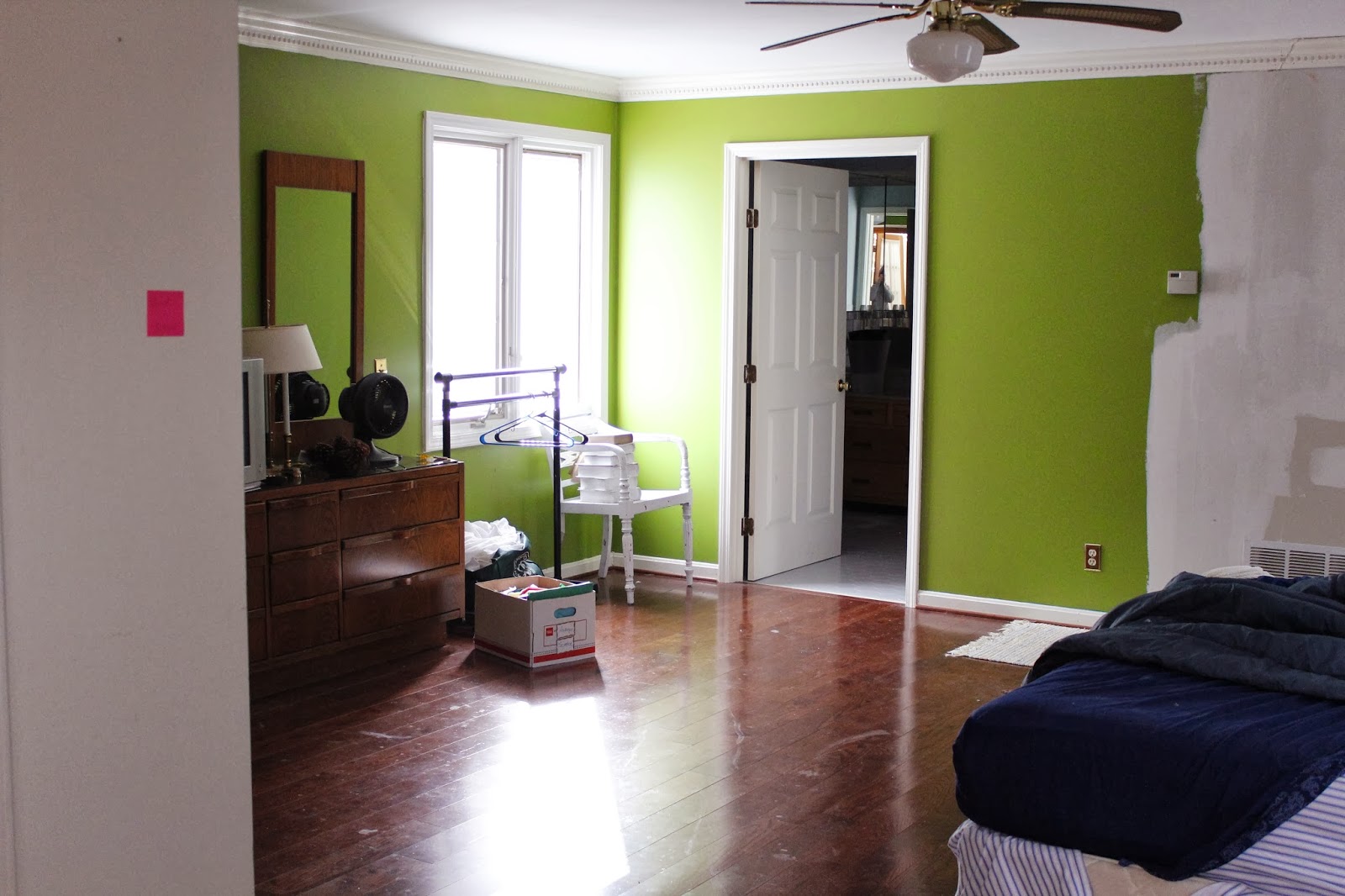 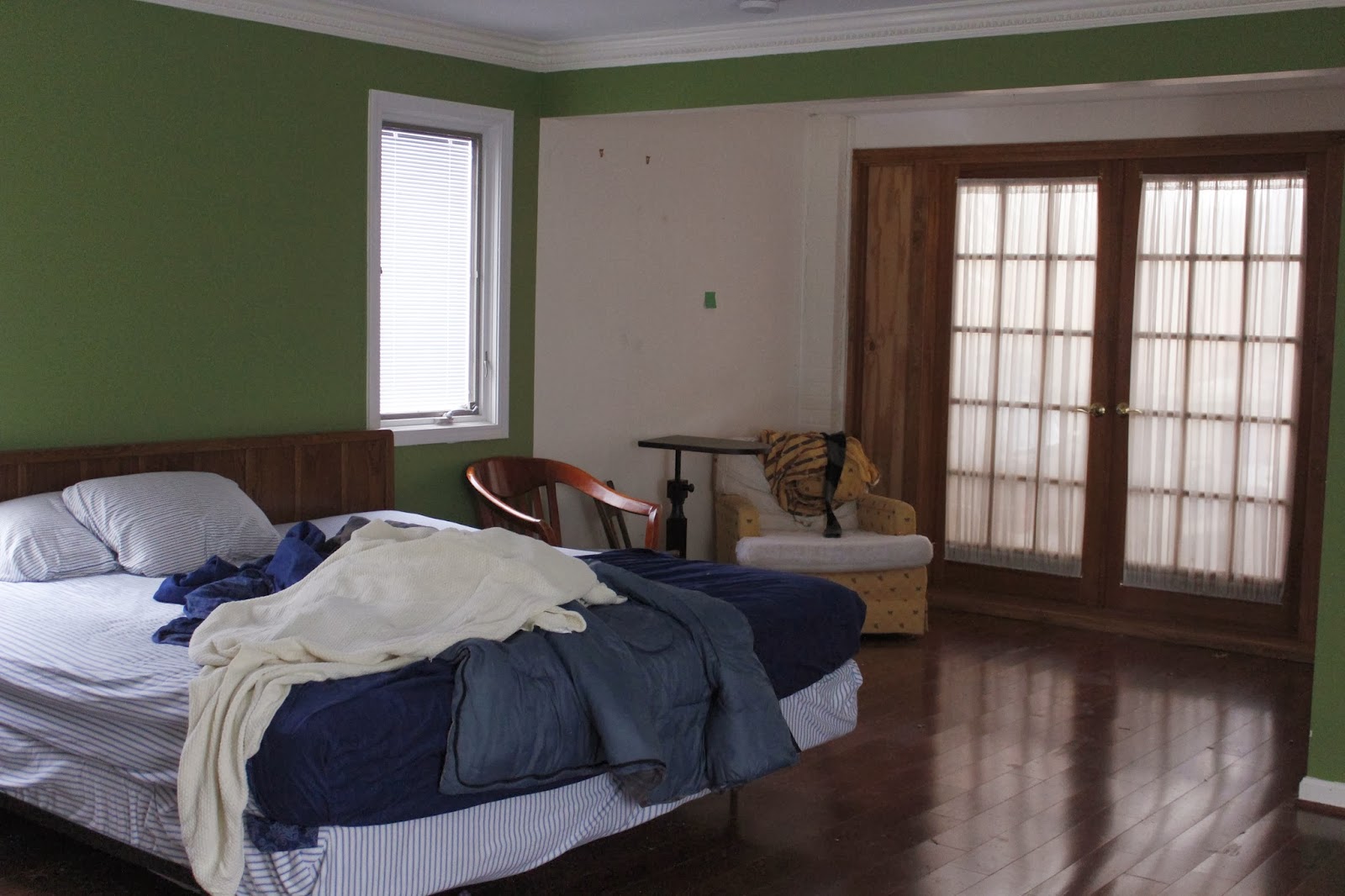 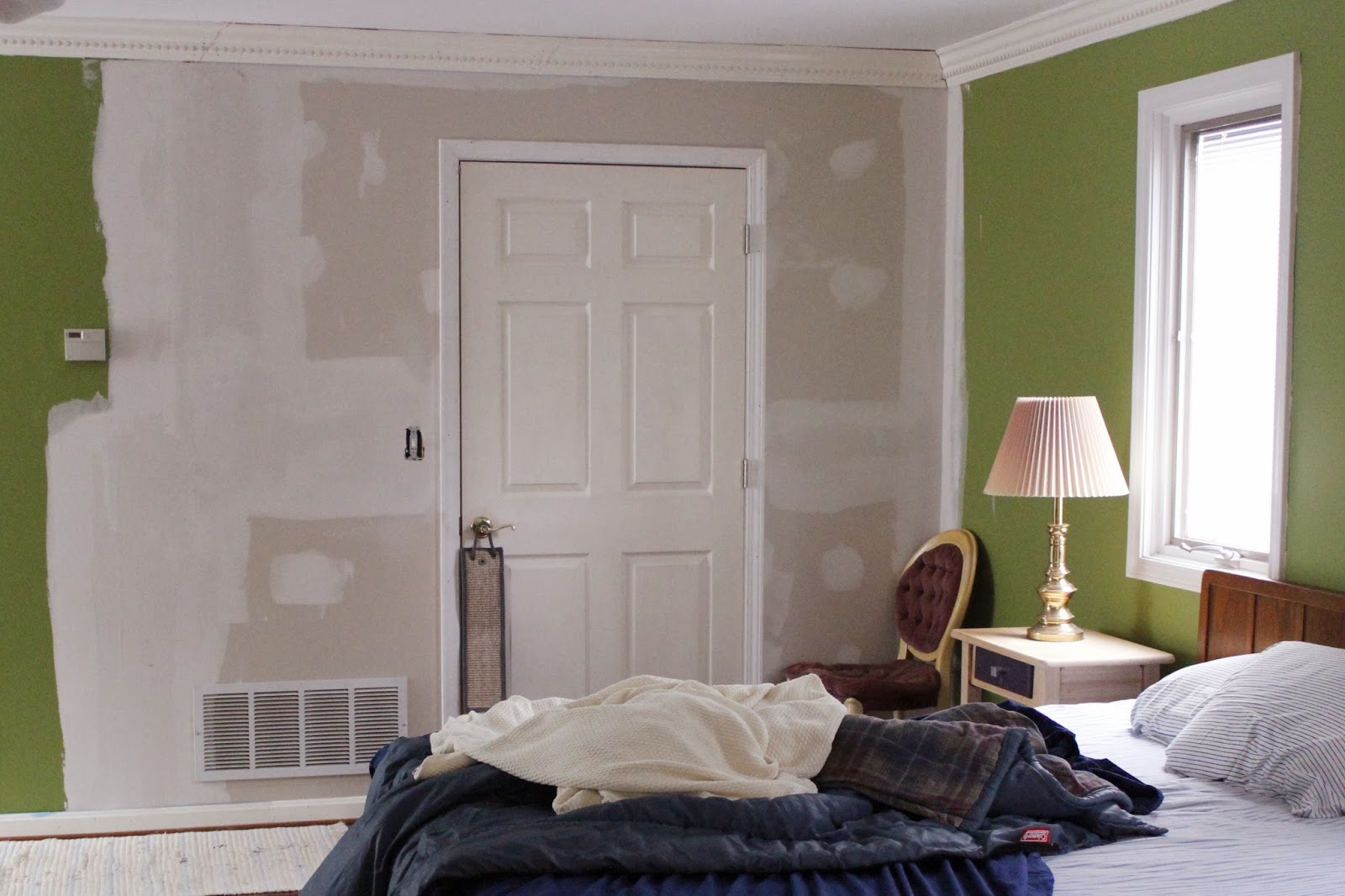 This was the room before we started. The first step was coming up with a design concept. Our goal was to use as many things that they already had in the house as we could and, of course, to save as much money as possible. We also wanted to create a room that was pretty, but not cluttered. Our mother's style is somewhat traditional and our father's style is 'anything free' with hints of 'beige and white everything' and 'absolutely no duvet covers'. We decided on a simple color palette and minimal pattern for the bedding to please Dad and added gold elements and some pretty accents to glam it up for Mom. Once we had a good idea of what the room would look like, we got rid of all the furniture that wasn't being used. Next we patched, sanded, and primed the walls. Then we painted the trim, doors and walls. (Kathleen was unfortunately coerced into painting all of the dentil crown moulding. Her arms are still sore). After about four weeks of hard (and secretive) work, the room was mostly finished. We sent our parents out on a Sunday afternoon and moved their bed, clothing, and the contents of their bathroom into the room and they came home to this: 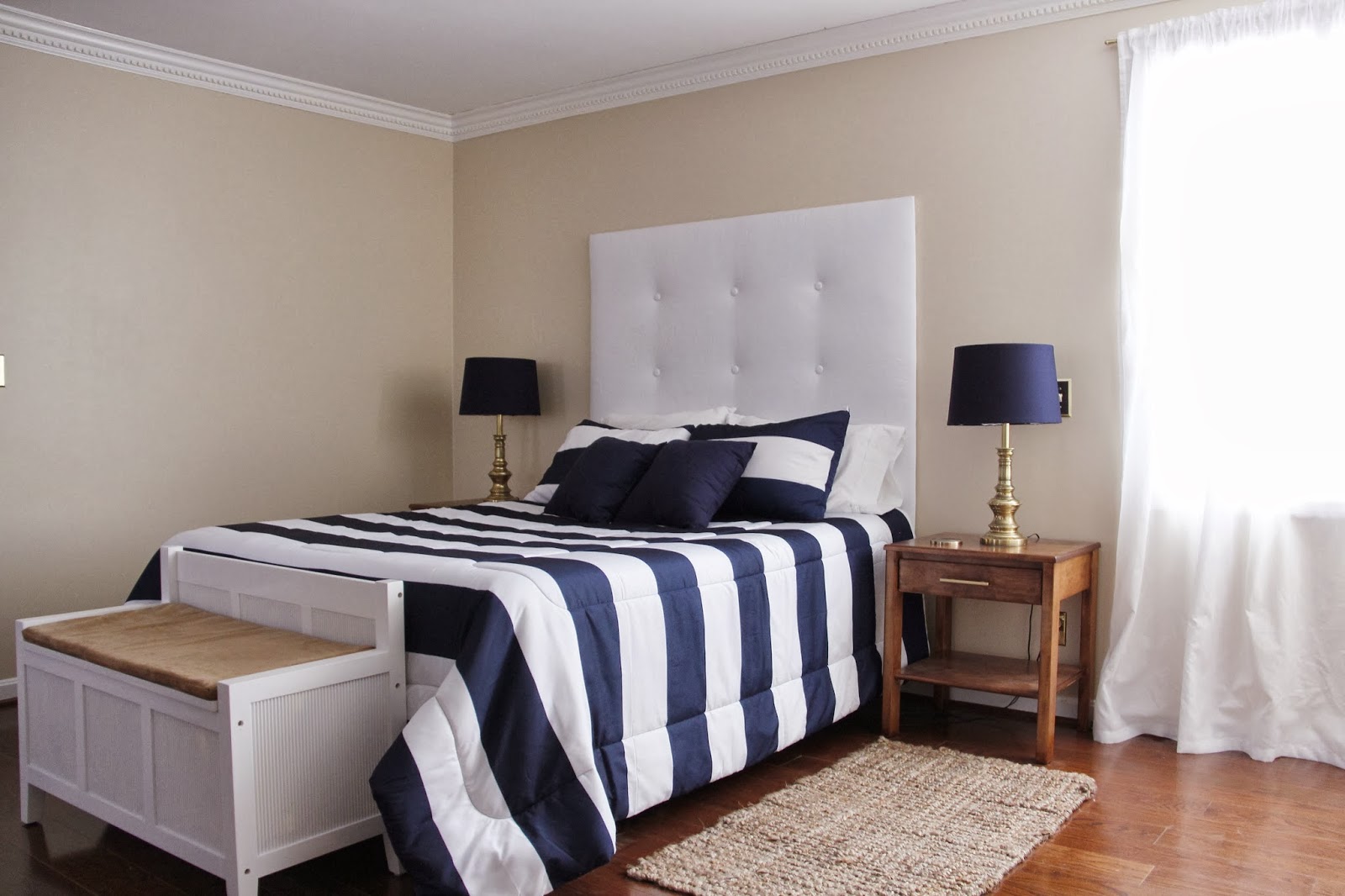 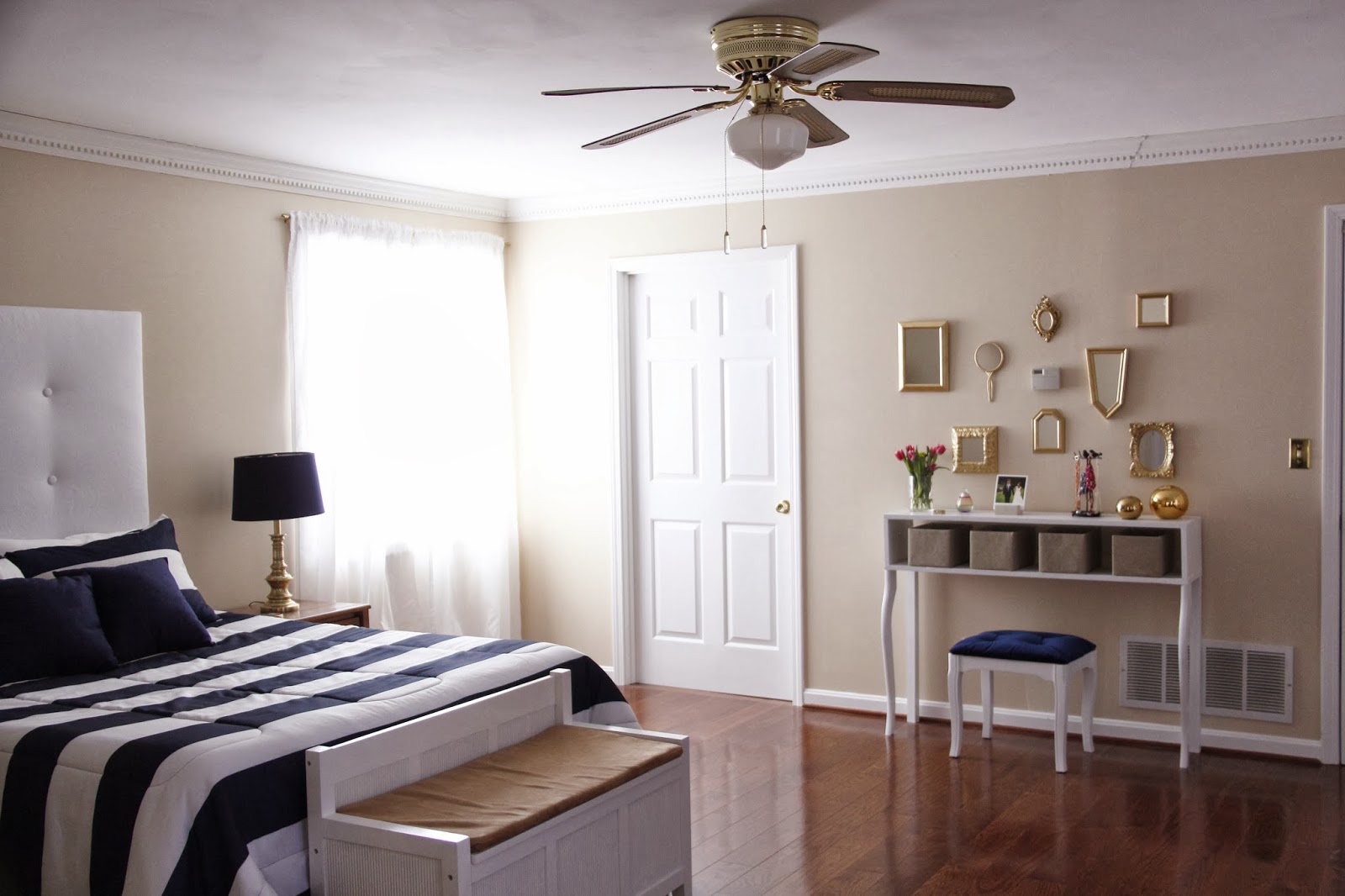 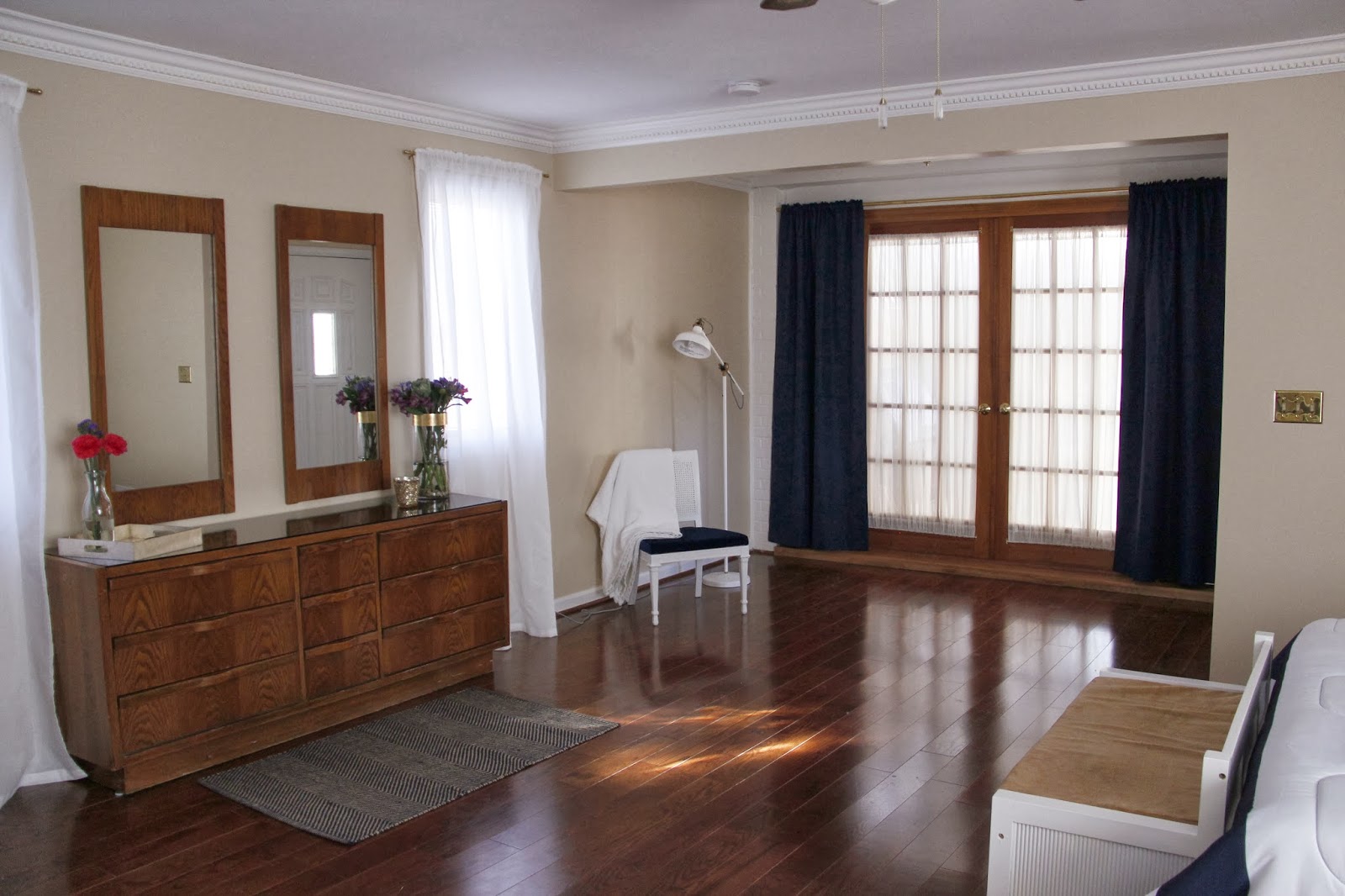 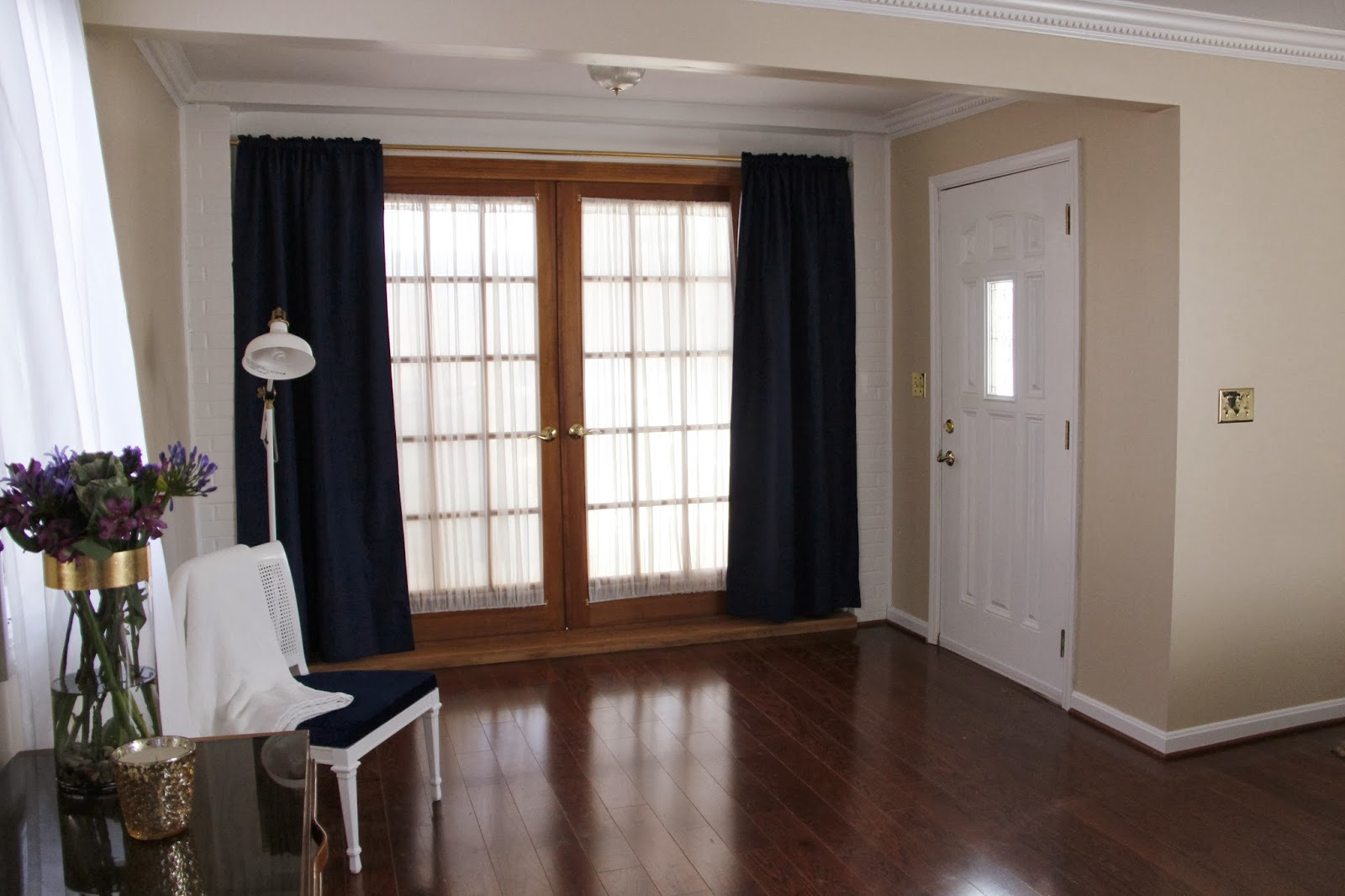 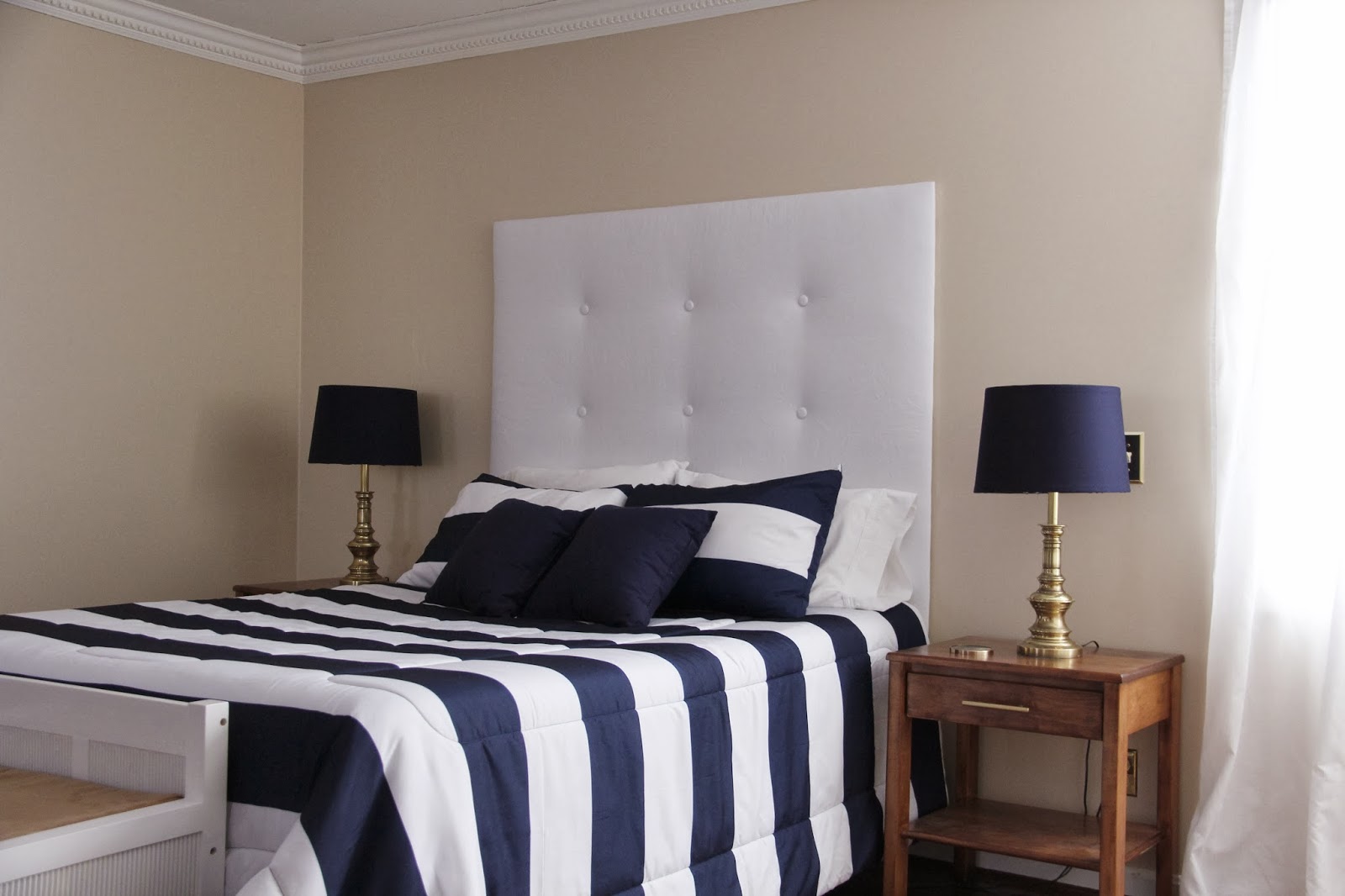 I made the headboard by covering a piece of pegboard with two layers of 8 oz. batting and white canvas fabric and tufted it with fabric covered buttons. I thought the pegboard would be convenient because I wouldn't have to drill holes for the buttons but it ended up being a total headache. The pegboard was too hard for the upholstery staples so half the staples ended up crumpling instead of going through. Next time I make a headboard I will definitely use plywood instead. The headboard is mounted on the wall. We bought the bedding from Target. My parents already had the lamps and we replaced the shades to update them a little bit. The nightstands were actually in the room I shared with my sister when we were kids. I found them in my parents' basement looking like this: 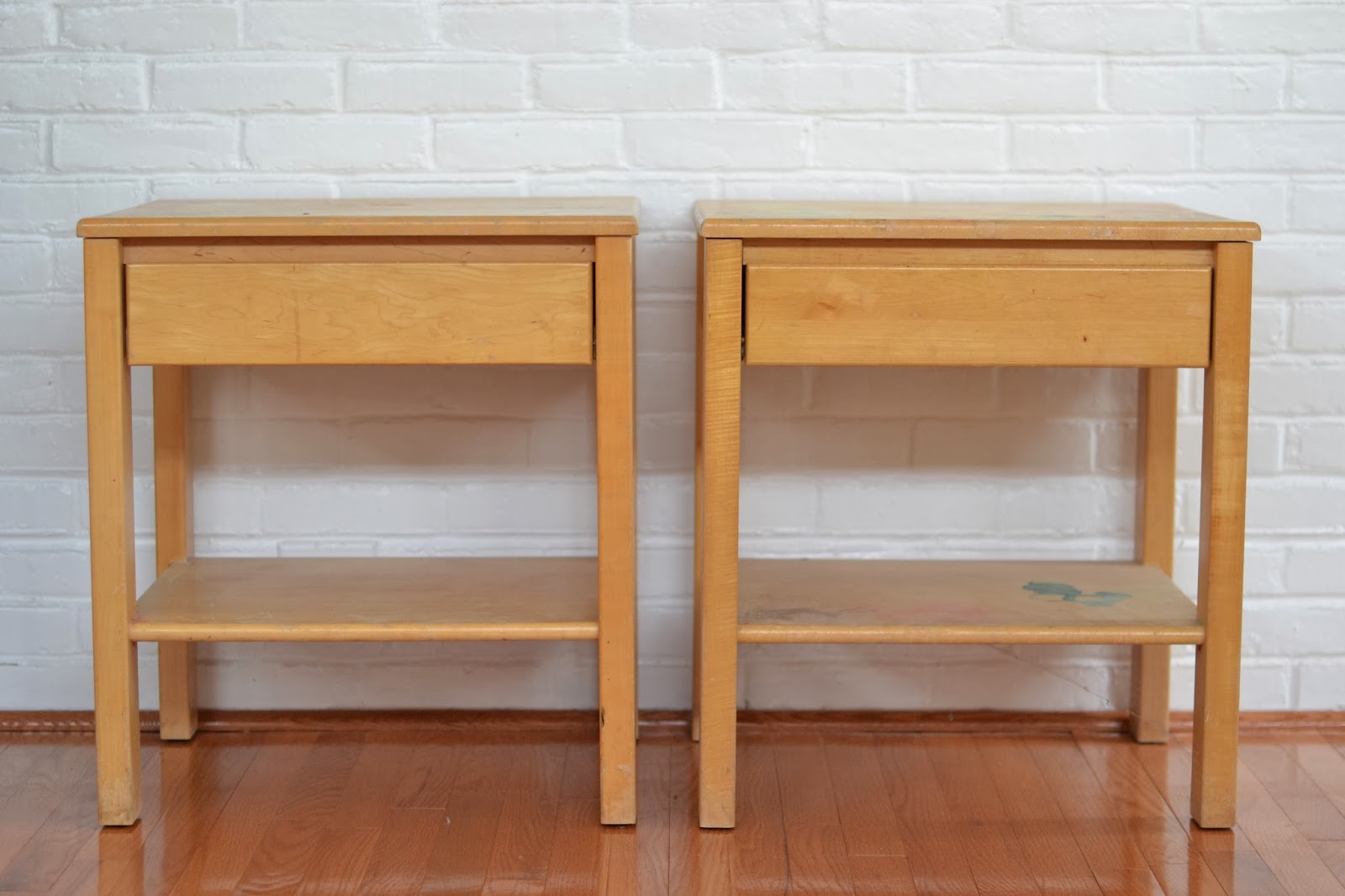 They had some unfortunate marker doodles that my sister and I made years ago, (remind me if I have kids to never buy them expensive furniture), but they were solid and refinishing them saved us a lot of money. I stripped and sanded them and then stained them to match the dresser and mirrors they already had. I added modern brass bar pulls to match the other gold accents in the room. 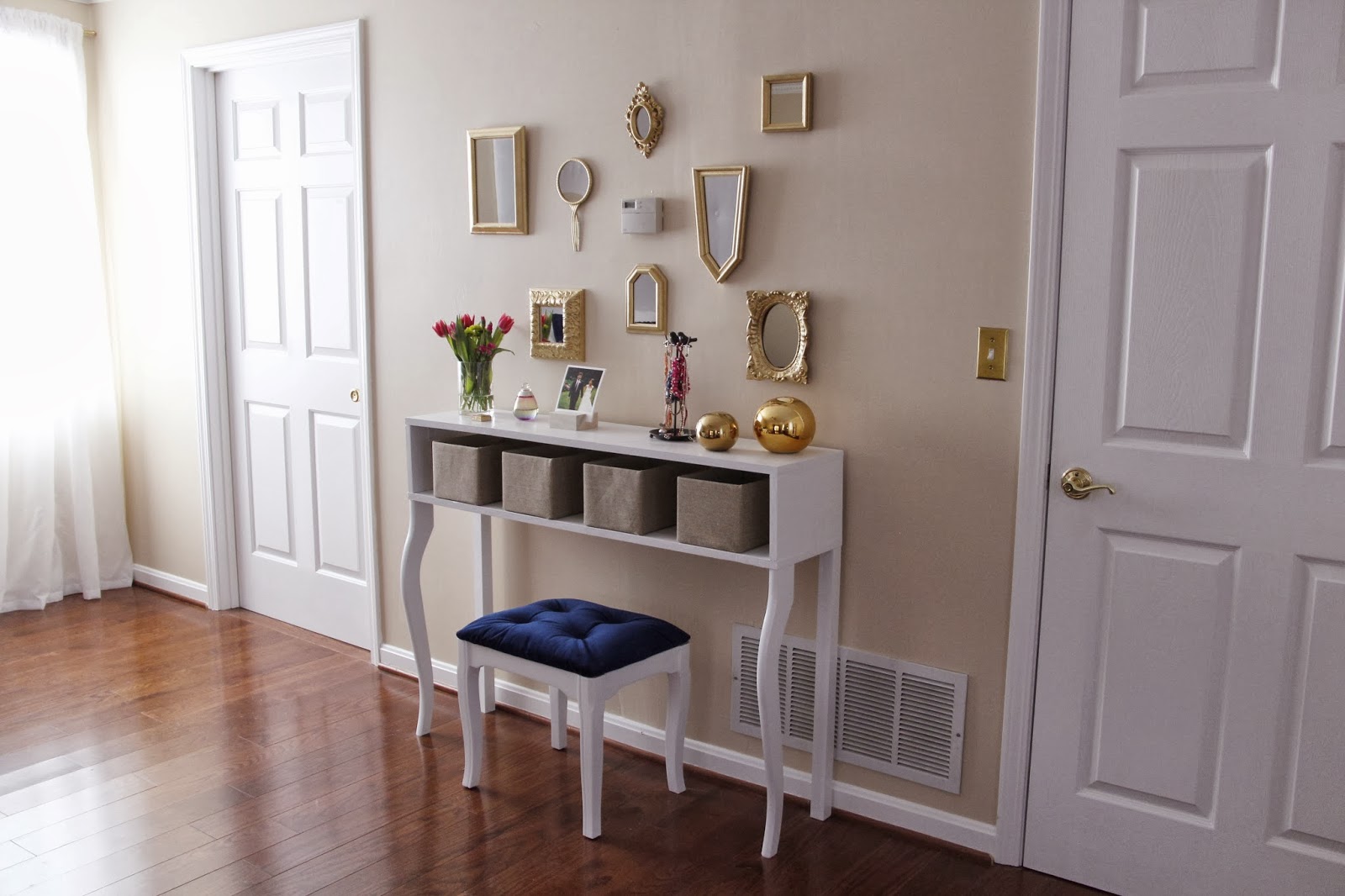 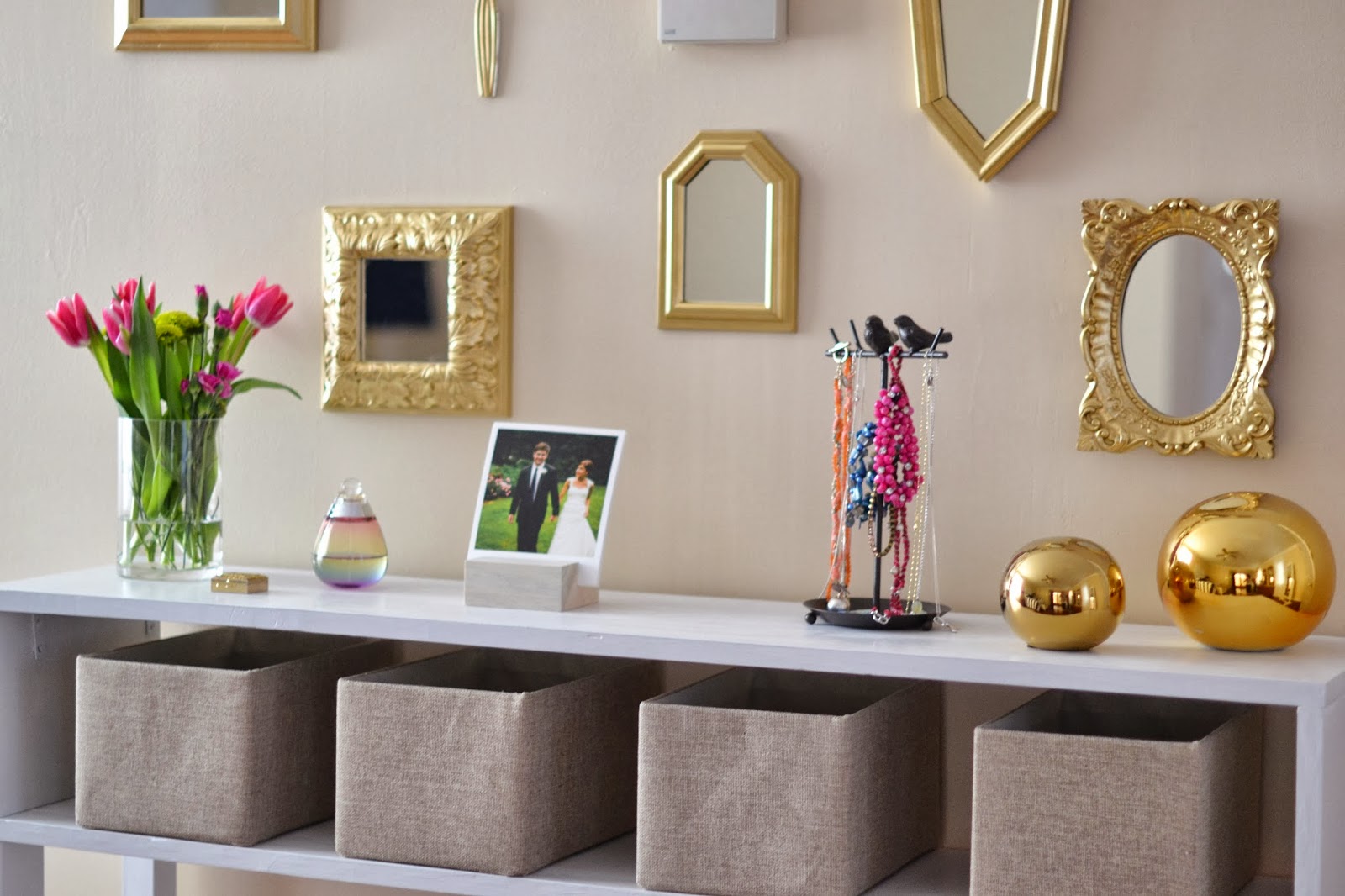 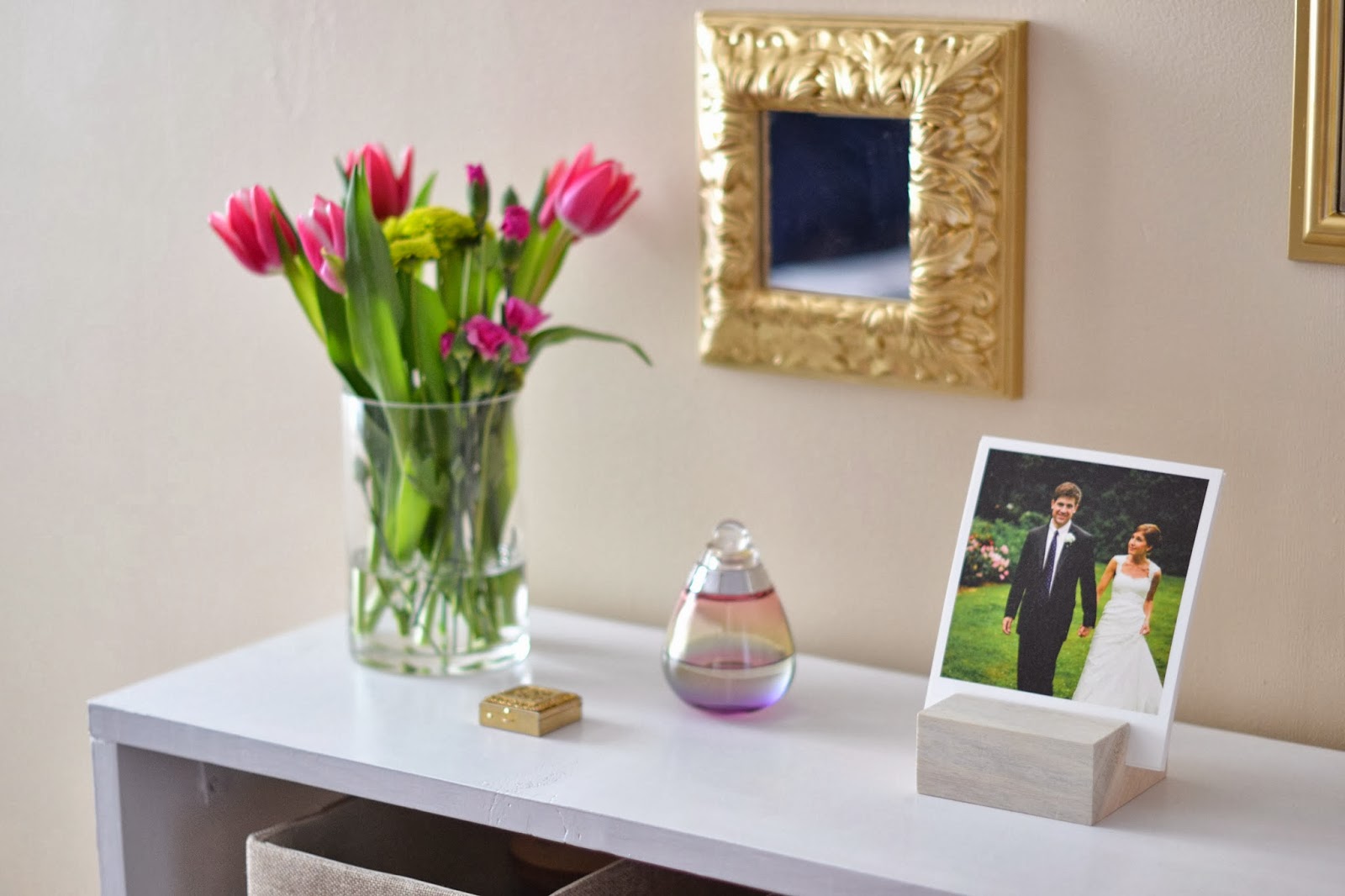 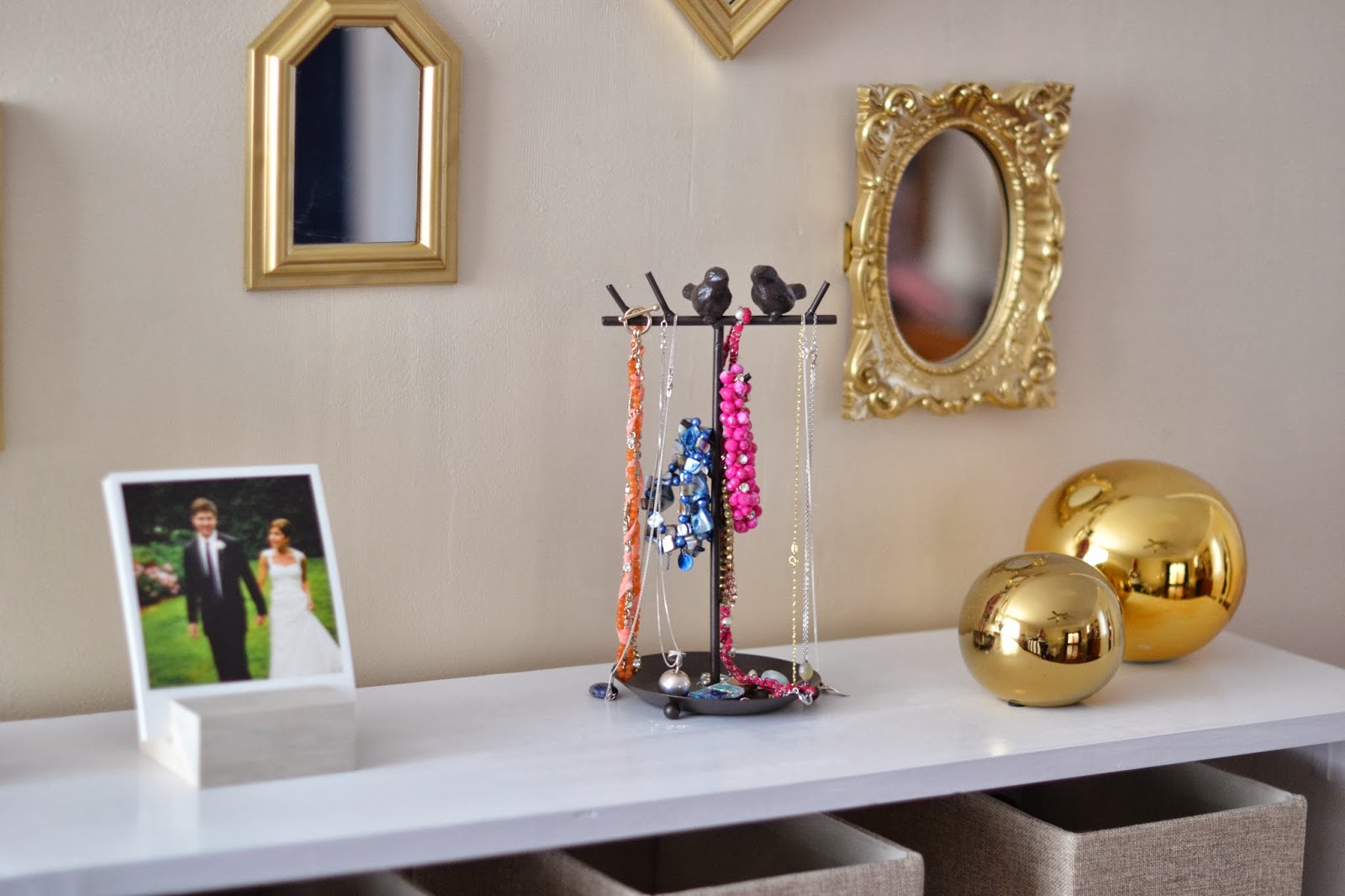 Kathleen found the mirrors at various thrift and antique stores and spray painted them all gold to create a uniform look. I built the console table with wood from the hardware store and used Ikea legs for the legs in the front. We finished it with storage bins from Garden Ridge, some cool gold spheres that Kathleen found at Goodwill for only five dollars, a print set that our sister Danielle gave our mom from the awesome store Artifact Uprising, and our mother's jewelry tree. The stool under the console was a piece we had on hand that was originally painted purple with a white upholstered cushion. We gave it a fresh coat of white paint and re-upholstered it in navy velvet. 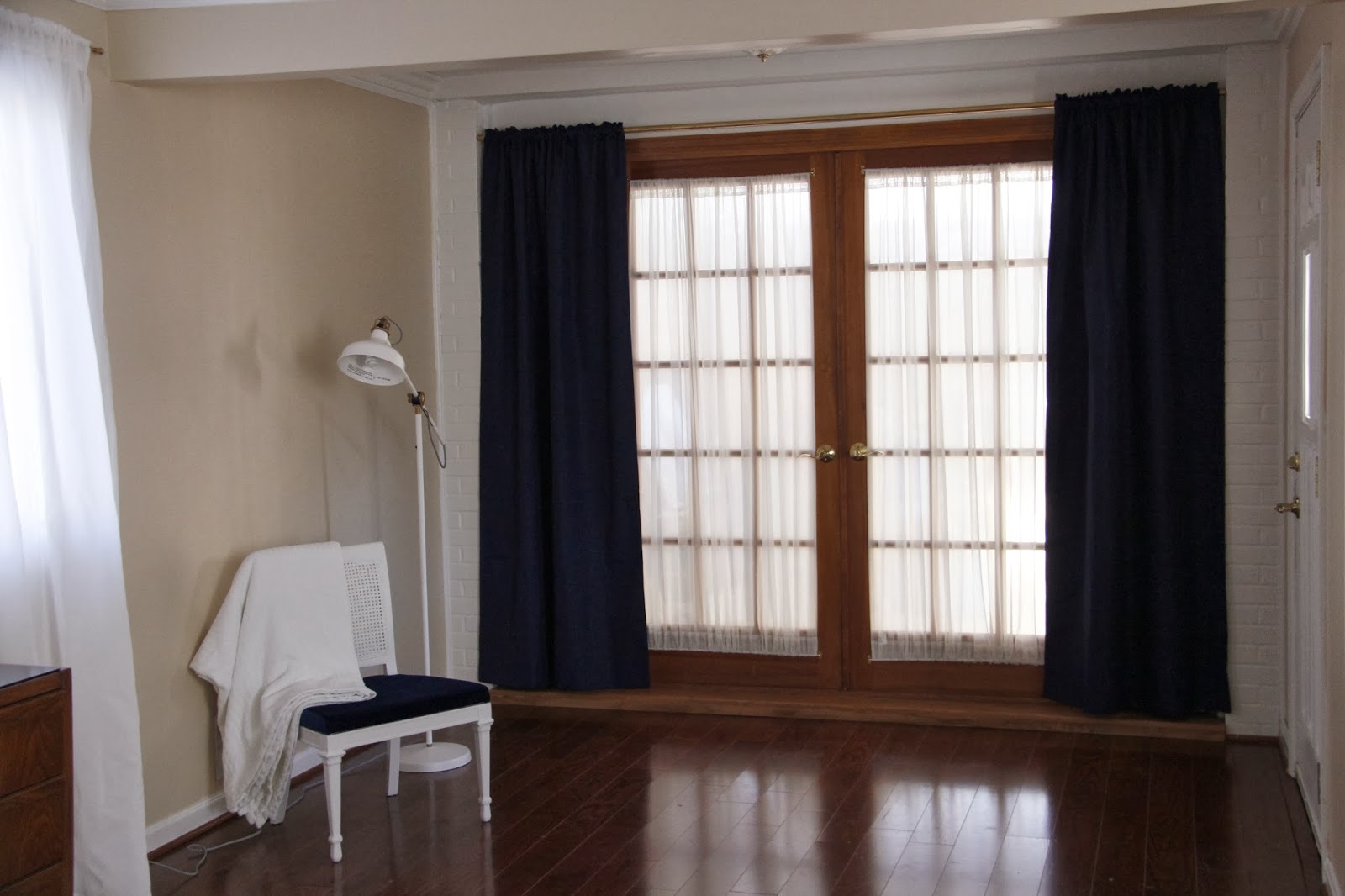 The chair in the corner is an antique dining chair that my grandfather was going to throw away a few months ago. I decided to save it and stored in the garage, thinking I would eventually find a use for it. I'm glad I did. 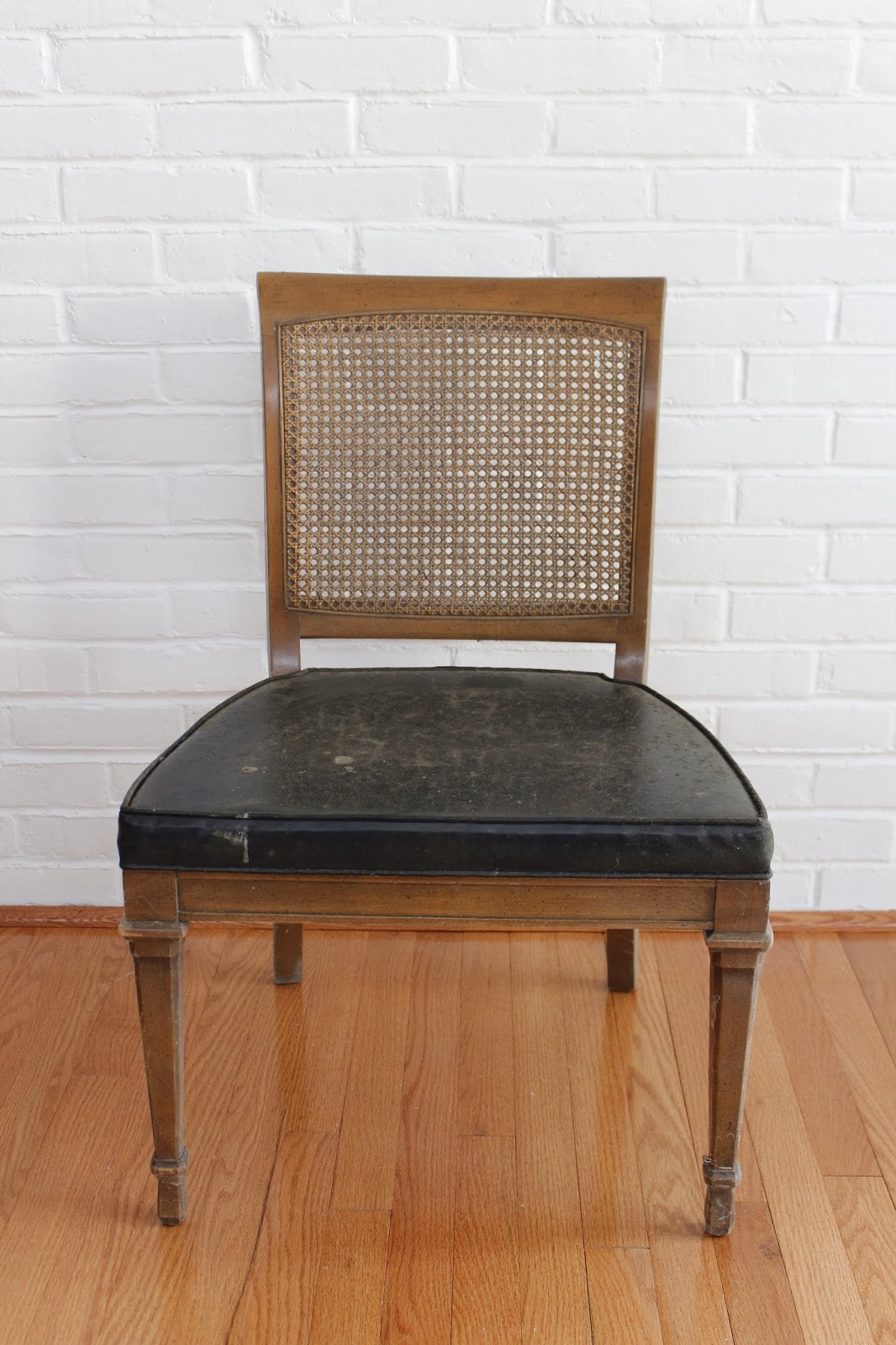 After a deep cleaning, I removed the seat, gave the frame a few coats of bright white paint, removed the old cushion cover and sewed a new one with the same velvet I used for the vanity stool. 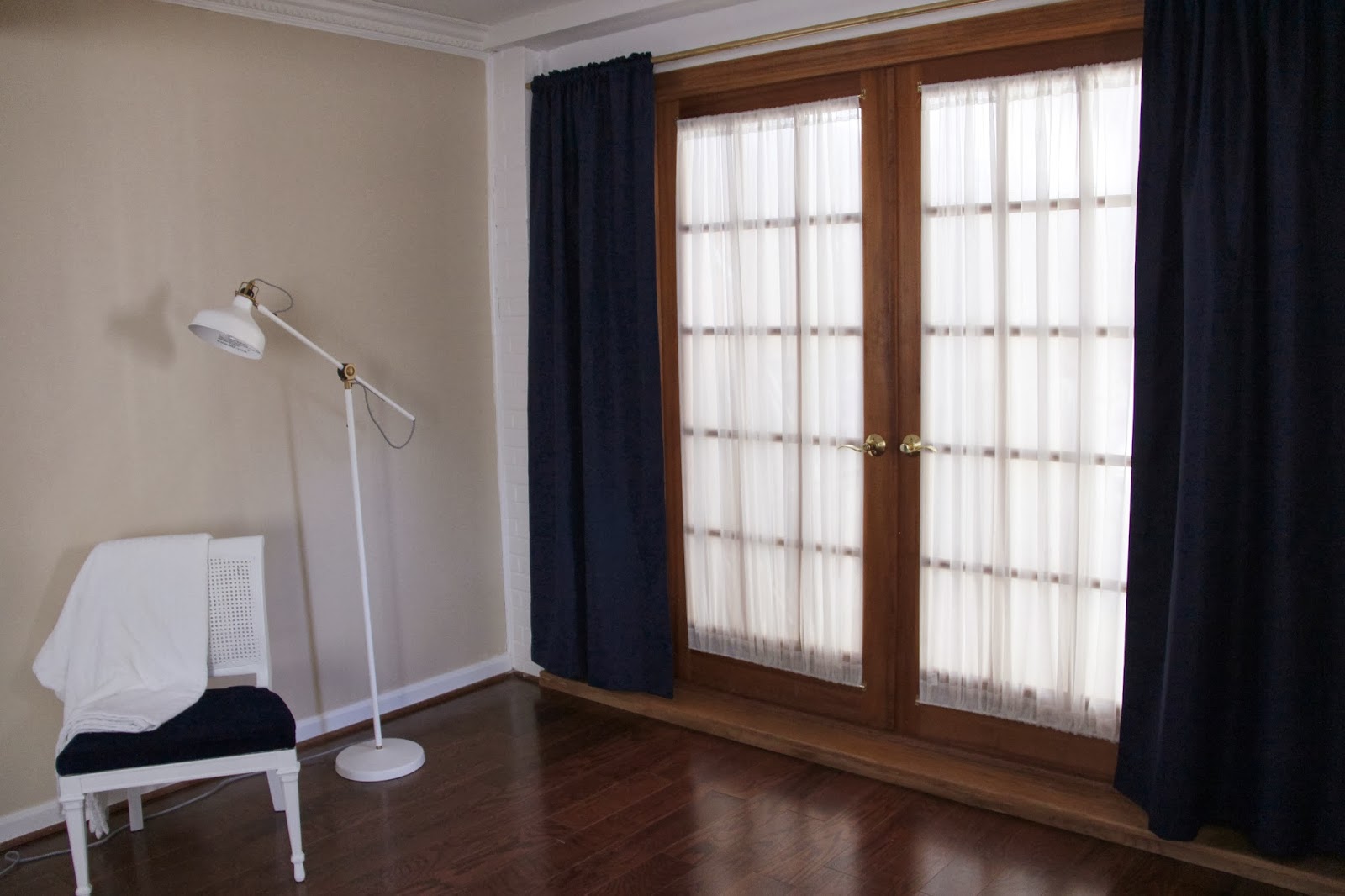 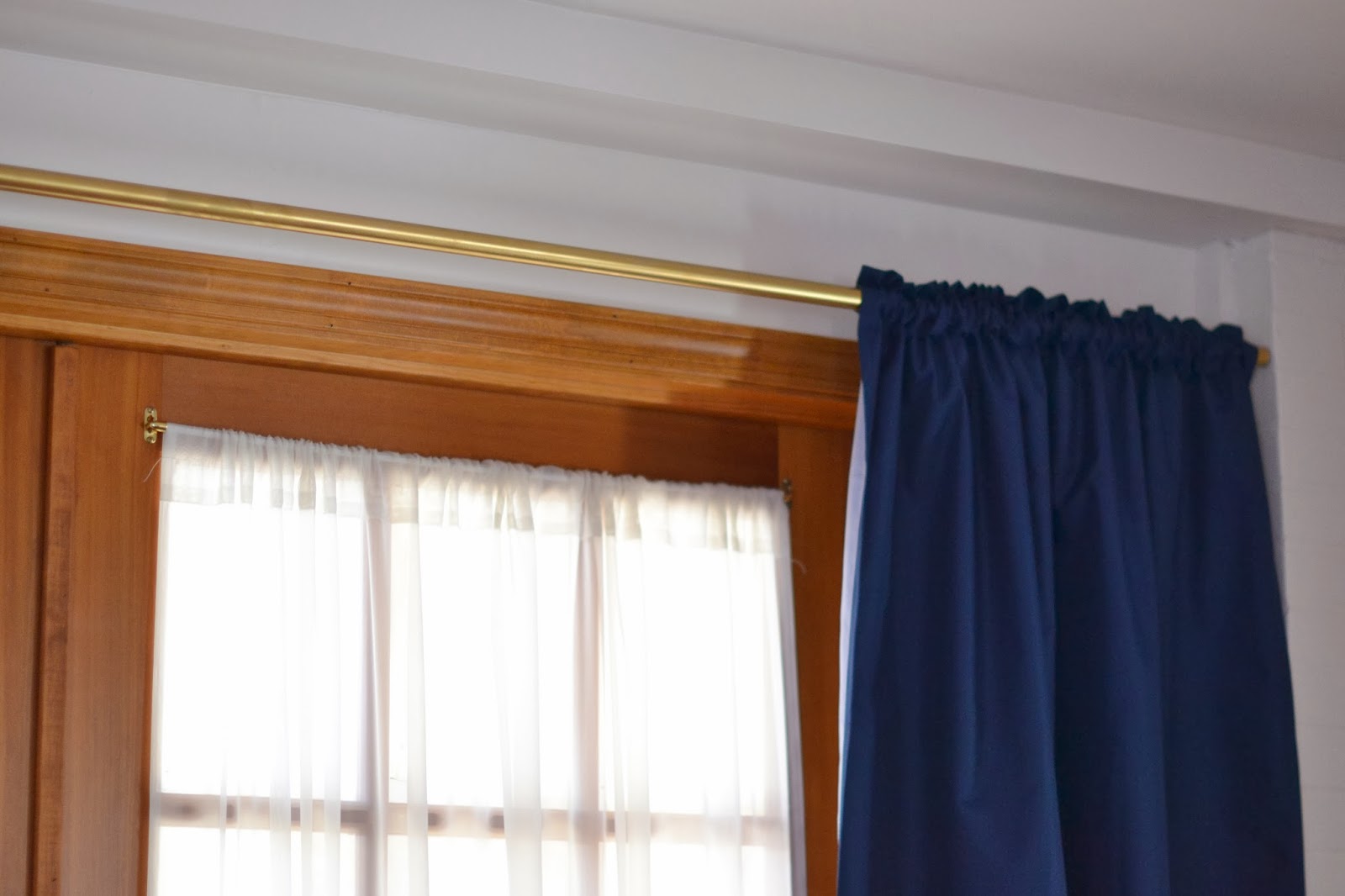 The lamp is from Ikea, the blanket and curtains are from Target, and the gold curtain rod above the door is actually a piece of 3/4" electrical conduit. Long curtain rods are pretty pricey and we were already going to have to paint all the curtain rods so they would be the same color so we decided a $3 piece of conduit was a better option than an $80 rod. I cut it to fit with a hacksaw and Kathleen spray painted it gold. We hung it using 3/4" curtain rod brackets from Home Depot, also painted gold. 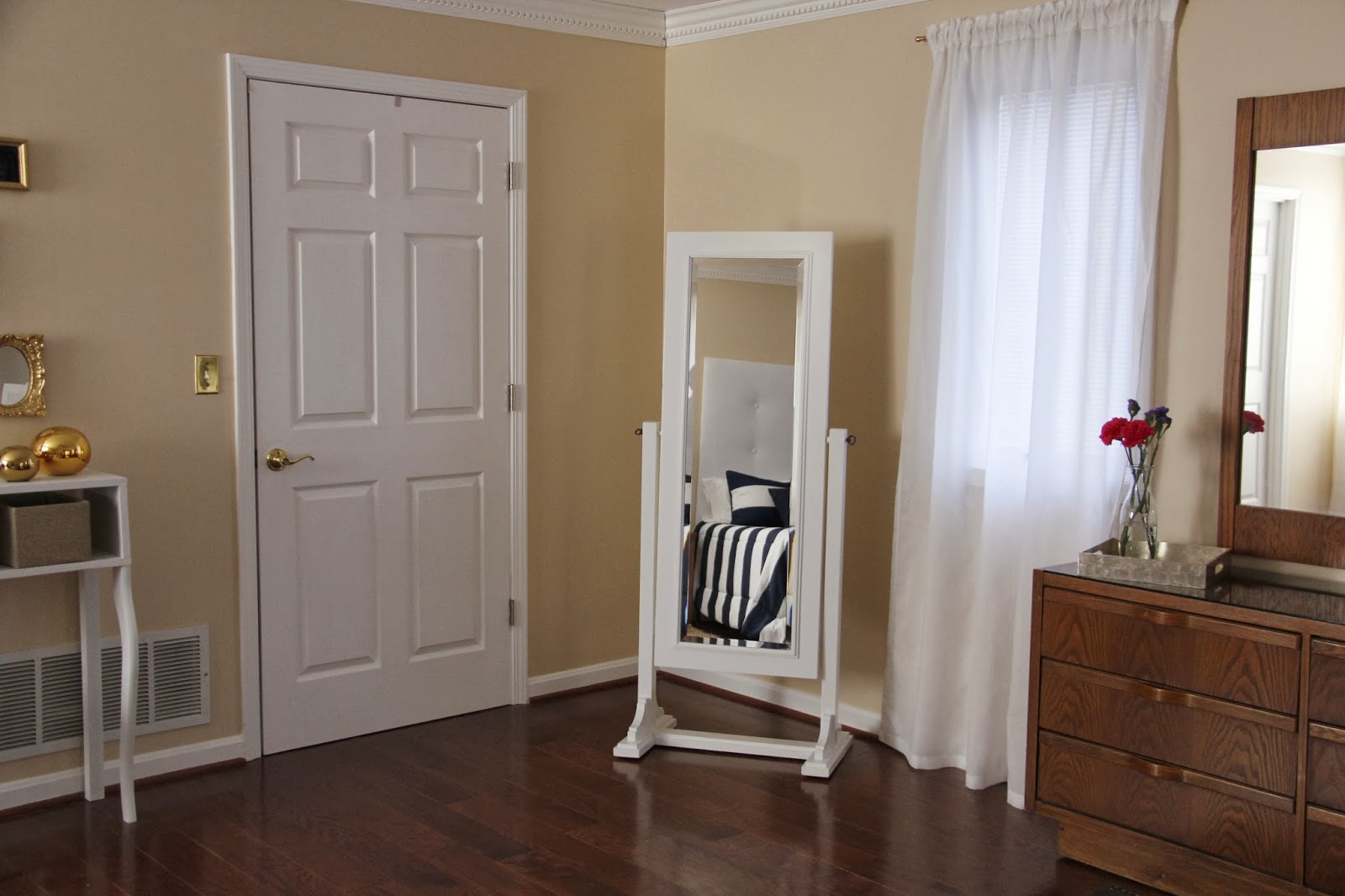 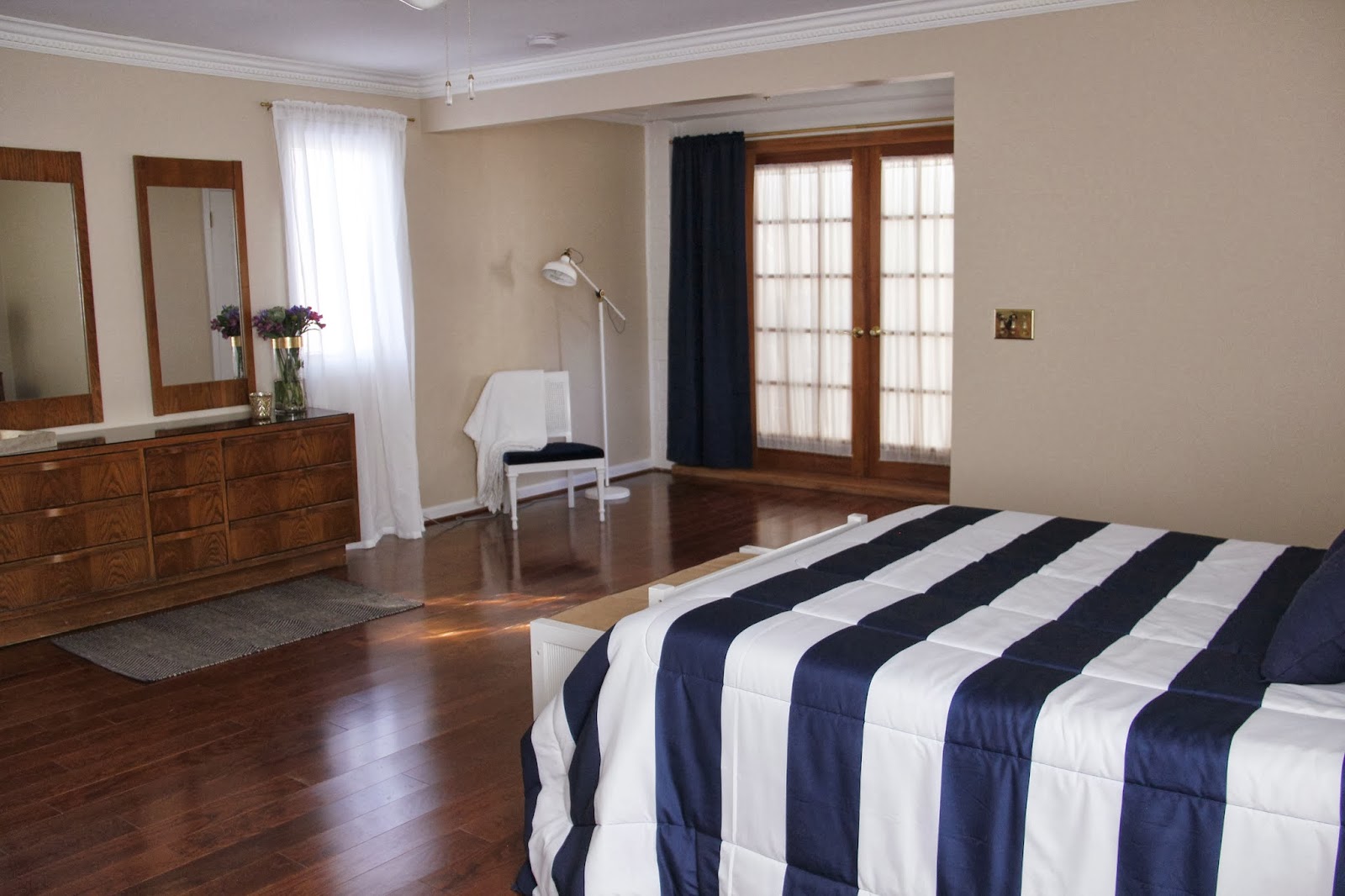 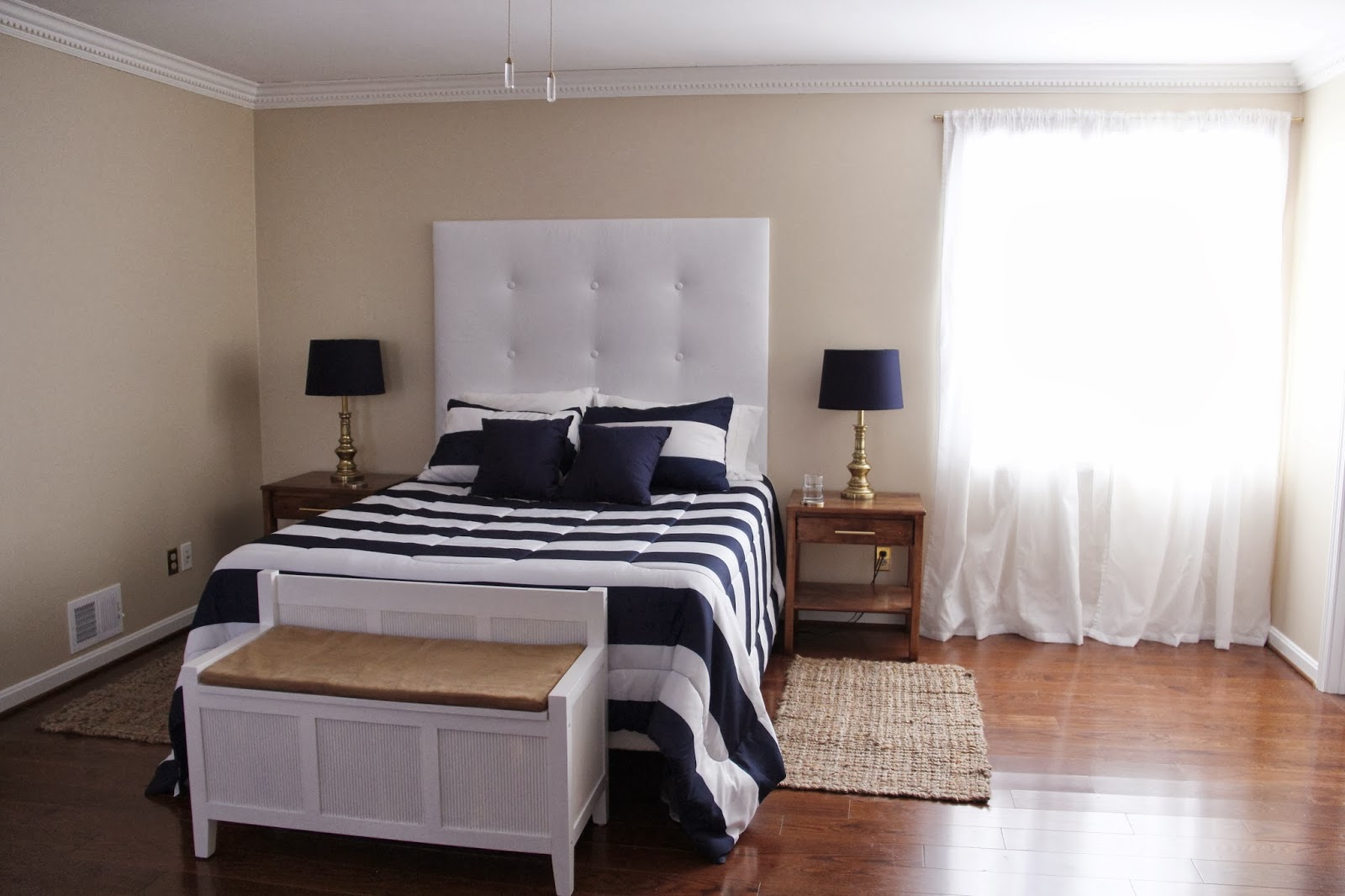 We accessorized the dresser with a tray from West Elm, a gold rimmed Ralph Lauren vase, and a gold candle from Target. The white curtains are from Ikea, the cafe rods are from Home Depot, the rugs by the bed are from Garden Ridge, and the rug in front of the dresser is from TJ Maxx. The white bench at the end of the bed and the white floor mirror were from a set that our parents already had. Our parents are thrilled with the room and we're thrilled with how well it all came together.